The Lyndon SGB team on the Compass Centre at Heathrow Airport has truly performed beyond expectation leading to an outstanding satisfaction to our customer Balfour Beatty.
Not only they have been rewarded the Supplier of the Month February for exceptional Health & Safety performance but also the Site Project Manager Jeff Carter felt impressed and send us a letter of commendation rating our service as Outstanding.
The awards are granted on the basis of a scoresheet prepared jointly by all of the Site Managers and were presented at the Night Managers meeting on 10th March.

Lyndon SGB’s task on this Heathrow Airport’s head office building is a complete external reglazing. The project site initially provided several challenges such as access to the building and limited storage for the site equipment. As the centre remained fully operational during the project Lyndon SGB made it a priority to ensure no disruption to the centre’s daily activities was made and, timely and effectively, erected the scaffolding as soon as delivered.

The site team led by Anthony Burt designed and erected a free standing structure as the scaffold couldn’t be attached to the building. They also provided staircase access to the top floor and full netting protecting site operatives and reducing material and rubbish fall. Having started in November 2013 and planning to finish in March 2014 the Lyndon SGB team on site are already ahead of schedule.

The site team’s exemplary safety behaviours, excellent H&S skills and attitude led to leadership on the BB Suppliers Safety League during February and praise from Head of H&S HAL Development D Pyle was received  when he personally visited the site and thanked the team. Similar feedback was received from Mike Evans (Head of HSE for HAL) who stated how impressed he was with the team at the Centre.

‘The guys have taken on the challenges and delivered the temporary work solutions and installation safely and ahead of schedule. The team have demonstrated a professional and dedicated approach to this sensitive project and I have no doubt Lyndon SGB will continue to deliver at the high standards experienced to date, and work with Balfour Beatty to bring the project to a safe and timely completion’ 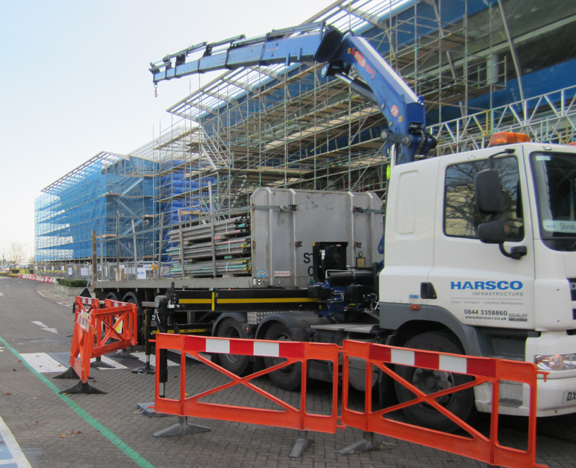