Harsco Infrastructure (SGB) has supplied a complex scaffold structure to the underside of the Jubilee Bridge at Inverbervie, near Montrose, enabling contractors to carry out vital repairs.

Opened in 1935 and named to commemorate the Silver Jubilee of King George V, the Jubilee Bridge is an impressive seven-arched viaduct road bridge carrying the A92 trunk road over Bervie Water, a small river running through a steep sided valley. Principle Contractor, Makers Freyssinet is carrying out repair work and installing a corrosion protection system to prevent weakening of the steel reinforcement within the bridge. Having worked with Harsco Infrastructure on a similar project, also on the A92 at Montrose, the company approached Harsco Infrastructure again to design an access system that would provide a safe and efficient means of delivering personnel and their equipment to the underside of the bridge arches.

Design of the scaffolding was complicated by the height of the bridge – reaching 10 lifts in places – and the steep-sloping wooded valley floor. Harsco Infrastructure’s solution was a combination of its modular CUPLOK® system scaffold, traditional tube-and-fitting scaffolding and temporary roofing beams to brace the tall structure and enhance its strength and rigidity.

Erection of the scaffold began in December 2008. To minimise the quantity of equipment required, Harsco Infrastructure supplied scaffolding for four of the seven spans, enabling Makers Freyssinet to start repairing the defective concrete. As the work progressed, the scaffolding was progressively dismantled and re-erected under the remaining soffits, providing continuous access to the workface without having to scaffold the whole structure at once. Harsco Infrastructure also had to design debris containment to ensure there was no contamination to the water course below the bridge.

Paul Wood, Contract Manager with Makers Freyssinet commented: “The sheer size and height of the bridge posed a challenge to the scaffold designers, who had to produce a solution that was not only safe for working at these heights, but also capable of erection and removal in the optimum time-frame. Harsco Infrastructure provided the most competitive solution without compromising performance or quality.”

Harsco Infrastructure will be on site for approximately 40 weeks, with the £1.3m repair contract due for completion in August 2009. 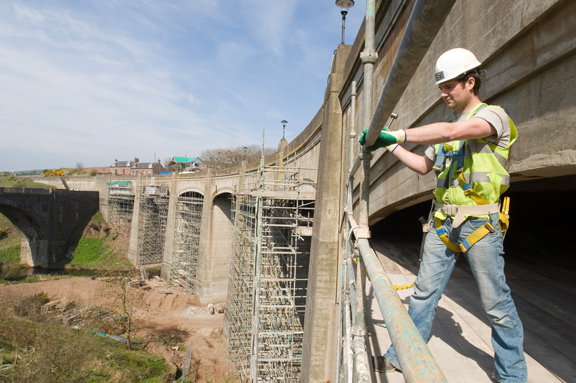