On schedule at MediaCityUK

Specialist mechanical access equipment from Harsco Infrastructure has been supplied to contractors working on Phase 1 of the £500 million MediaCityUK project, Manchester, to complete cladding and glazing contracts on site.

Currently one of Europe’s biggest privately-funded developments, MediaCityUK will be the new home for BBC North from 2011 and will also be the base for a new education centre for the University of Salford, as well as a wide range of other media-related enterprises.

Peel Media’s construction partner, Bovis Lend Lease, began work on Phase 1 of the 36-acre site in June 2007. The three buildings being leased by BBC North at MediaCityUK have already been handed over for fit-out. Phase 1 will be completed in early 2011 and will comprise 65,032 sq m of office space, a 23,225 sq m studio block, retail and leisure space extending to almost 7,432 sq m, two residential blocks providing 378 apartments and a 218-bed Holiday Inn.

Harsco Infrastructure have been supplying specialist cladding and glazing contractors with MASTCLIMBERS™ access for installation of the building envelopes.

The traditional method of installing cladding and other façade finishes usually involves a fixed scaffold for access and the site tower crane (or cranes) for materials handling. But on this project, the use of MASTCLIMBERS™ provided both access and materials handling, thereby saving hire costs and speeding up construction times.

The electrically-powered platforms, which travel up and down the façade on steel lattice towers tied into the building, are capable of lifting bulky items, including cladding panels, as well as workers with their tools and equipment. At MediaCityUK, this has enabled the main contractor to off-hire the site tower cranes well before the end of the main construction phases.

MASTCLIMBERS™ are currently in use on four of the high-rise buildings. On Building’s A and B, Harsco Infrastructure supplied its MASTCLIMBERS™ to cladding company GM Services. Building A comprises a five-storey office block for the BBC with a 25-storey residential tower containing 174 apartments.

Building B follows a similar layout, with a five-storey office block complemented by a 22-storey tower containing 200 apartments. This building is also pre-let to the BBC.

Elsewhere on site, MASTCLIMBERS™ are being used by McMullen Architectural Systems who are completing the external envelope of the 19-storey office tower and a 16-storey hotel tower.

“MASTCLIMBERS ™ are much faster to install and remove than traditional scaffolding” he adds. “An 80m high, 25m wide elevation can be installed in one week, whereas the equivalent scaffolding would take three or four weeks at either end of the job”

Many platforms have been erected on steel support and some are supported by brackets constructed from the Harsco Infrastructure formwork product range, raising them clear of the ground to reduce congestions around the buildings’ footprint.

Now, as the buildings reach the final fit-out stage, Harsco Infrastructure is gradually reducing its presence on site. “MASTCLIMBERS™ have an advantage over traditional scaffolding even at this stage, as they don’t obscure the façade, making the scheme easier to market” says Mr Bryce. 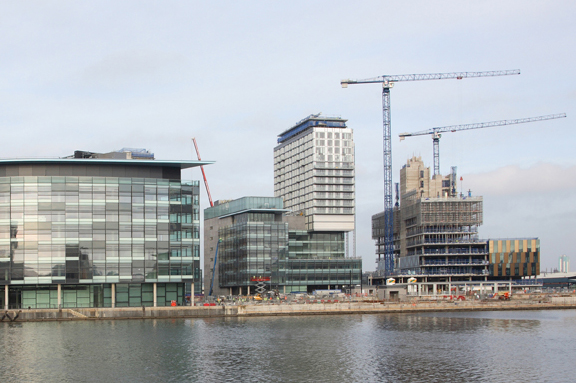