Harsco Infrastructure’s (SGB’s) scaffolding and access expertise has been drafted in to help with the cladding and glazing installation on one of Dublin’s most complex new developments. The Grand Canal Square Theatre and Commercial Centre is at the heart of the city’s Grand Canal Harbour redevelopment project. It will comprise a 2000-seat theatre and concert venue plus two galleria buildings for commercial office accommodation.

The design is the brainchild of top international architect Daniel Libeskind, famous for designing strikingly angular and faceted structures such as the Jewish Museum in Berlin and Manchester’s Imperial War Museum North. Libeskind is also the designer of the World Trade Centre “Memory Foundations” redevelopment project in Manhattan.

Working with German-Italian cladding firm Permasteelisa, Harsco Infrastrucuture was presented with the challenge of designing and erecting a scaffolding structure that would provide cladding operatives with safe and secure access to every part of the building’s complex façade. Permasteelisa supplied its slimline triple-skin stainless steel cladding panels and curtain wall glazing system for the atrium and roof areas, including a “beak” cladding, the buildings distinctive overhang.

“The biggest design obstacle for Harsco Infrastructure to overcome was to ensure we had good access to the whole external surface, despite the complicated shape”, comments Gordon Earle, General Manager with Permasteelisa. “To make it even more challenging, we had to make the best use of limited tie positions to avoid clashes with the cladding panels” he adds.

Due to the irregular shape of the building, some parts of the scaffold had to be suspended from above rather than supported from ground level. To accomplish this, Harsco Infrastructure installed special roof beams to transfer the weight of the suspended scaffolding directly to the structural frame.

Commissioned in 2004, the Grand Canal Square Theatre and Commercial development is now approaching completion and is due to be handed over to the client, Ramford Ltd/Chartered Land, in December 2009. 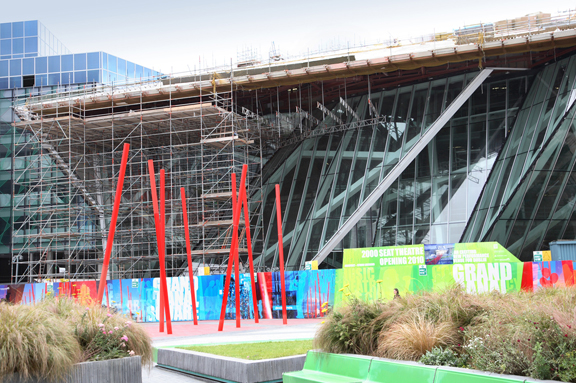