The access solution involved the use of modified mast climbing work platforms. This bespoke idea was first used at the JMS site at Deephams for Thames Water, and has been adapted to suit the Maryport scheme. The construction of a large-scale detention tank at the existing pumping station is to prevent storm water surges entering the Solway Firth.

The new 25 metre circular concrete tank has been built inside a secant piled wall and is 14.5 metres in depth. “The in-situ reinforced concrete walls of the tank would traditionally be built using scaffolding,” explains Lyndon SGB’s Mechanical Access Director. “However, this can historically prove expensive and difficult to manage inside the cramped excavation pit. Working with the civil engineering contractor, JMS, we developed the innovative use of mastclimbers to enable the concrete formwork to be poured inside the excavation whilst at the same time providing full access to the walls of the shaft.”

Lyndon SGB provided six mastclimbers for the project, each fitted with a special curved face that allowed the workforce direct access to the tank walls as they were being built. Although using this type of equipment in such a deep underground excavation is unusual, Lyndon SGB and JMS had implemented a similar application to great effect on the previous storm water tank project at Deephams, London.

“The six mastclimbers proved to be very flexible insofar as we were able to raise and lower them as we needed so that several construction activities could progress simultaneously. Steelfixers were working at a higher level on one mastclimber while joiners were erecting formwork at a lower level on another”, comments JMS representative Aidan Kerrigan. “This allowed us to work at a more rapid pace than would have been possible using traditional scaffolding.”

“Safety is always Lyndon SGB’s prime concern on any project, but especially where such an innovative solution is being used,” commented Reid. “However we had assessed the situation and the safety angles very carefully and thoroughly before using this application on the previous project, and we knew that it was absolutely perfect for the Maryport. 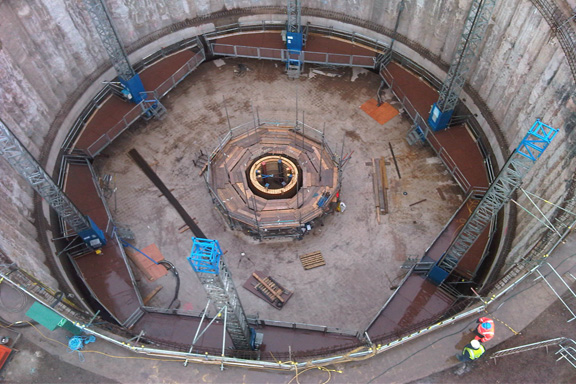