Due for completion towards the end of 2011, the new £170 million hospital wing will provide 528 new beds in 17 wards, 11 new operating theatres, an emergency care centre, surgical and medical assessment units. It will also offer a maternity and obstetrics department, women and children’s unit and specialist endoscopy, critical care, coronary and dialysis facilities.

The eight-storey structure is notable for its elegantly curved façade enclosing an internal courtyard area. But while this is an important feature of the design, it represented a significant challenge to contractors working on the project, including Lyndon SGB.

Lyndon SGB were required to install scaffolding to the building’s façade including the external perimeter, internal walls and lift shafts to permit the installation and erection of brickwork, masonry, cladding, curtain walling and render finishes.

“Every external scaffold had to be designed to follow the contours of the façade,” explains Lyndon SGB’s Operations Manager. “This demanded considerable design capability and limited the number of suppliers capable of undertaking the scaffolding contract,” he adds.

Lyndon SGB submitted its tender for the access contract in May 2006 and worked closely with Balfour Beatty to develop a suitable scaffolding solution. “Our own experienced design team convinced Balfour Beatty that Lyndon SGB was the most capable bidder”. And as the UK’s largest access specialist, Lyndon SGB had the resources to ensure compliance with the contract conditions.

“Lyndon SGB’s track record indicated that they could deliver everything on time and to budget” comments George Young, Senior Project Manager for Balfour Beatty Construction. “Our framework agreement with Lyndon SGB provided the site procurement team with confidence in the supply chain’s capabilities. It also made the tendering process more transparent and clear” he adds.

Naturally, site safety was a major consideration during the procurement process as well as during installation and use of the scaffold structure. “We have been working to the ‘collective protection’ principles of NASC Guidance Note SG4:10, rather than the current ‘tunnelling’ method of scaffold erection outlined in SG4:05” says Lyndon SGB.

This means that that scaffold erectors on the Fife Hospital site were protected from falls at all times during erection and dismantling of the access systems on the site – a major contribution to site safety. Three different methods were identified as providing suitable collective protection for this project and the most appropriate one selected before each section of scaffolding commenced.

Lyndon SGB was awarded the contract in April 2009 and started onsite two months later. The scaffolding contract is due to end in October 2010 with the new hospital wing due for completion towards the end of 2011. 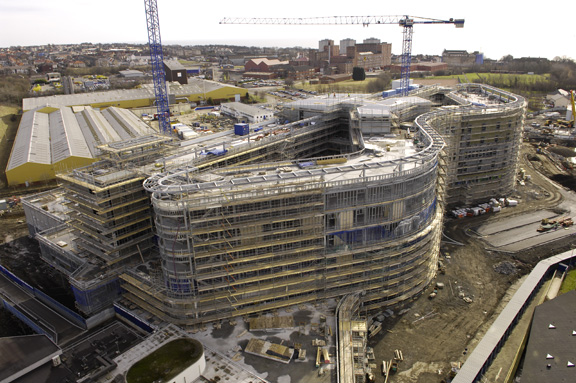