Lyndon SGB has provided its CUPLOK® multi-purpose steel scaffold system to a major project which will help keep a key part of Britain’s waterway network operating efficiently for the next 25 years. The CUPLOK® system has been used to provide safe and reliable edge protection and access to the famous Five Rise canal lock system in Bingley, West Yorkshire, which has been drained for maintenance for the first time in a quarter century.

“This is another excellent demonstration of the versatility of CUPLOK®” comments Lyndon SGB’s Marketing Manager. “CUPLOK® is a system that’s designed for general access, shoring and supporting duties. It can be used for continuous façade, circular scaffold, birdcage access or staircase access applications and so was perfect for an out-of-the-ordinary project such as this.”

The 18th Century Five Rise system was drained as part of a £200,000 project to replace the giant 10ft-wide gates which separate the individual locks. “Inevitably there was some uncertainty about the conditions that would be found when the locks were drained of water, so the scaffolding system that was chosen had to be sufficiently flexible to cope with any unexpected problems,” adds Lyndon SGB. “Lyndon SGB worked with the project contractor, British Waterways, to ensure that any unforeseen situations could be accommodated and that each part of the lock system was fully edge-protected and easy to access.”

The Grade I listed, five-rise flight of locks is the steepest of its kind in the UK, and raises the Leeds – Liverpoolcanal over 59 ft.

The Lyndon SGB CUPLOK® system is designed to provide maximum safety while working at height and features a unique node-point fastening mechanism that enables an access framework to be erected far more rapidly than with conventional methods. 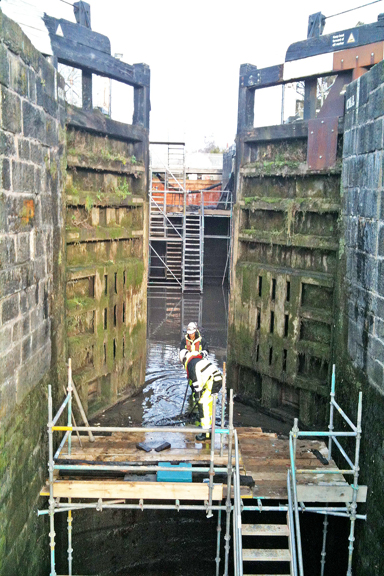