The winner of the 2010 “Mastclimbing Platform Achievement Award” at this year’s International Awards for Powered Access (IAPAs), has been awarded to Harsco Infrastructure (formerly SGB). The company beat off competition from other leading firms at the IPAF awards ceremony, held in London on 25 March.

Praised by the judges for its extensive work in promoting the mast climbing work platform concept over the past decade, Harsco Infrastructure demonstrated its achievements by citing the widespread adoption of mast climbing work platforms by local authorities for building maintenance. Their entry demonstrated how Harsco Infrastructure’s MASTCLIMBERS™ could improve safety and productivity, as well as saving money and reducing the impact on tenants during improvement works.

During the late 1990s Harsco Infrastructure began to work closely with housing associations and main contractors in the public housing sector to challenge the accepted practice of always specifying scaffolding for improvement works. By systematically comparing the benefits of MASTCLIMBERS™ over traditional scaffolding, Harsco Infrastructure was instrumental in bringing about a change in attitudes towards the benefits of powered access construction methods.

A major component of this campaign was to stress the reduction in the social, physical and mental impact of essential maintenance work on the tenants while delivering better security and savings for the housing association. “We are delighted to receive this award in recognition of the work we’ve put into promoting the use of mast climbing access equipment in the public sector” comments Cameron Reid, Harsco Infrastructure’s Business Development Director for Europe. “We feel we have fundamentally changed attitudes towards this form of access product, and the award is recognition of that fact”.

Harsco Infrastructure was also shortlisted in the “Contribution to Safe Working At Height – Rental Company” category for the company’s many recent initiatives designed to improve safe working on its MASTCLIMBERS™. The development of its colour-coded inspection tags was praised for its ability to deter tampering and provide an instantly visible indication of the status of every anchor tie connecting the mast to the support structure. 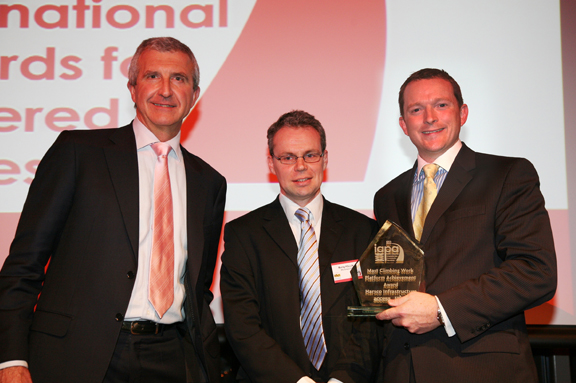