Harsco Infrastructure have equipped their mastclimbing work platforms with a unique custom-designed monorail system, which is helping contractors speed up construction of a new Grade A commercial development in the heart of Glasgow. 2 West Regent Street is a high-specification 10-storey mixed-use development comprising nine floors of office accommodation above a ground floor comprising retail units. The client is Scottish developer City Site Estates.

In order to achieve efficient progress on the construction programme, main contractor Taylor Woodrow needed to find an external access system that would allow the rapid installation of the building’s glass curtain-walling façade, without monopolising the site’s tower crane.

The solution was found in the form of nine Mastclimbers™ from Harsco Infrastructure, five of which have been specially modified with a custom-made monorail system designed to lift and position the glass panels against the building’s 50m high façade. “It was important that the handling system for the cladding panels did not take up valuable hook-time from the site’s tower crane, which is used for all other materials handling on site”, explains Harsco Infrastructure Operations Supervisor Colin Farquharson.

Working closely with Taylor Woodrow, Harsco Infrastructure engineers expanded the existing capability of the mast climbing work platforms and attached a horizontal monorail to the top of each pair of mast towers. An electric winch, mounted on an underslung trolley running along the monorail, carried the vacuum-lifting device that was used to handle the glass panels.

“The monorail system effectively provided us with the equivalent of five cranes, which has meant we could really speed up work on site” says Mike King, Project Manager with Taylor Woodrow. “We were therefore able to maximise installation of large glass units on multiple work faces which would otherwise have solely relied on the tower crane thereby limiting the amount of labour we could use”

An additional advantage of the monorail system is that the low profile allows it to continue operating at wind-speeds above that the tower crane cannot work. Using the system saved approximately four weeks in the cladding schedule, estimates Mr King. “The combination of the monorail with the mastclimbing work platform helped us get early completion of the building envelope and improve productivity by up to 300%”, he says. “The system itself is far quicker to install than traditional scaffolding; in this case it took only about a week to install, whereas scaffolding would have taken three or even four weeks”.

Harsco Infrastructure started erecting the Mastclimbers™ in February 2009 and the cladding was completed at the end of July. 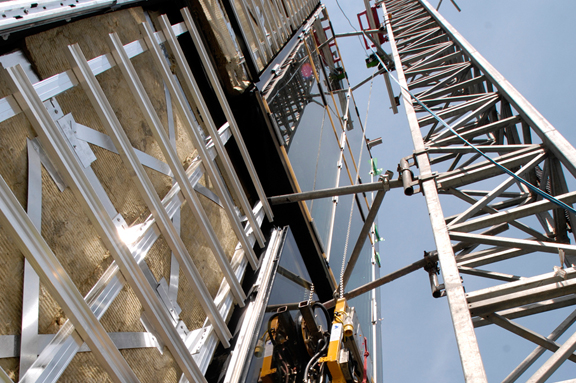