Harsco Infrastructure (SGB) has supplied access scaffolding and a temporary roof structure as part of the multi-million pound restoration of the National Trust’s Grade I listed house at Tyntesfield near Bristol. Somerset contractor CS Williams is leading the £4.5 million project, which involves re-roofing, re-servicing and extensive conservation of the building’s ornate Gothic Revival stonework. All this will take place in full public view, giving visitors a chance to see conservation in action.

Four weeks of intensive design work culminated in harsco Infrastructure winning the contract with a completely free-standing scaffolding and roofing solution which imposes no load on the fragile building. Access scaffolding to the roof and chimney stacks is suspended with no intermediate support from the temporary roof beams which span up to 55m, one of the largest spans constructed in Europe. The base of the free-standing scaffold is supported on temporary concrete strip and pad foundations cast around the perimeter of the building.

As well as safeguarding the fabric of the building, Harsco Infrastructure Design Manager Chris Rogers had to accommodate the National Trust’s requirement that the house remain open to the public throughout the two-year project. “We had to design the scaffold so it was flexible enough to be modified as work progressed while including safe permanent walkways to allow access points for members of the public to view the work taking place”, comments Mr Rogers.

It’s not unusual for The National Trust to carry out conservation work in front of the public but it’s the first time it has opened its doors while work on this scale takes place. This public involvement gives visitors a unique opportunity to see what’s involved in restoring a spectacular Victorian estate.

The success of the work taking place at Tyntesfield will provide a blueprint for the National Trust conducting similar future projects while the building remains open to the public. So far, the results are encouraging, with visitor numbers up on previous years. 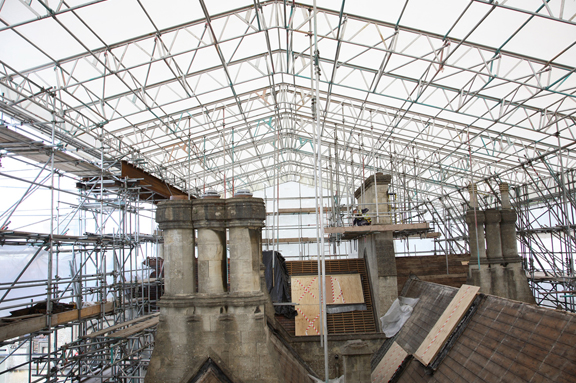