Two Mastclimbers™ from scaffolding and access specialist Harsco Infrastructure (SGB) have been used by builders ROK in the cladding of the futuristic sloping façade of Diageo’s new distillery at Roseisle, Speyside.

The £40 million building is the first new malt whisky distillery to be built in Scotland for 30 years. A marriage of age-old whisky-making methods and dramatic architecture, the building houses traditional copper stills, made by skilled coppersmiths, inside a futuristic steel framed building designed by leading architects Austin Smith Lord.

One of the unique features of this building is a long ten-bay 15m high façade, which, inclined at 15 degrees to the vertical, proved a major access challenge. Cladding panels are often installed from mobile scissor lifts, but as these machines only operate in a vertical plane, the sloping facades could not be accessed without considerable difficulty.

Harsco Infrastructure’s solution was to use Mastclimbers™, which, with their wide work platforms travelling on towers running parallel to the façade, could reach every part of the sloping elevation.

The two 15m high masts were installed twice: first on one half of the façade and, when that was fully clad, they were dismantled and re-erected on the other half enabling the rest of the cladding to be completed.

Working closely with ROK, Harsco Infrastructure developed a design which optimised the access solution to produce a method that was quick, cost-effective and minimised interference with installation of the cladding and insulation materials.

The two twin Mastclimbers™ would also allow the cladding subcontractor to install thermal insulation and cladding panels over the steel frame.

“We were originally going to use scissor lifts with extending platforms, but this presented problems of instability at maximum working height”, comments ROK senior project manager Tom McLaughlan. “Scaffolding seemed to be the only alternative until we consulted Harsco Infrastructure who proposed the use of Mastclimbers™, which they have used on inclined facades before.”

To support the inclined towers, Harsco Infrastructure designed special base units, offset by 15 degrees, to transfer the loads to the ground. The lattice towers were also supported at the top of the façade and at intermediate points to provide the necessary lateral stiffness.

“Harsco Infrastructure was heavily involved in the design process, working with us and the designers to determine the anchor points for the masts, taking into account the position of the various openings in the façade. What started out looking like a very complicated access problem actually turned out to be a straightforward operation that worked well and went very smoothly”, adds Mr McLaughlan. 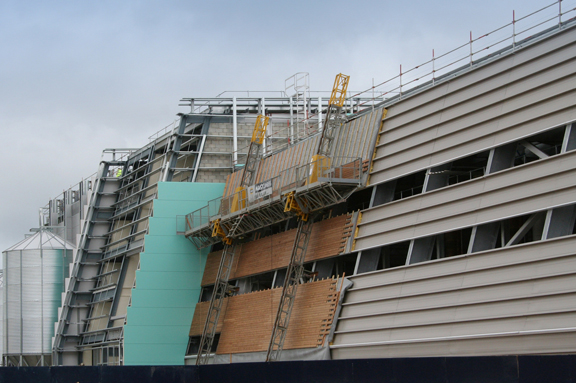