Four separate roof sections are required to cover the Grade II listed building, which is having an additional storey built and a new permanent roof installed. The £35 million project also involves removing every internal floor of the building and reconstructing the inside to provide a new head office for an international technology company.

The Harsco Infrastructure roof system was installed using a ‘roll-out’ method of erection, which allows all work to be done from one gable end scaffold with no need to climb beams. This not only gave a safe system of work giving compliance to Work At Height Regulations but was also important due to the restricted space available on site.

The unique design of the Roof allowed the client to open up the roof at any time to facilitate craning of materials to the roof.

“Harsco Infrastructure’s experience of scaffolding and temporary works engineering meant that they immediately understood our requirements and worked closely with us to develop the right solution.

“Our key requirements of safety and cost-effectiveness were easily met by this system” adds Mr Southall.

The project is due for completion in April 2010. 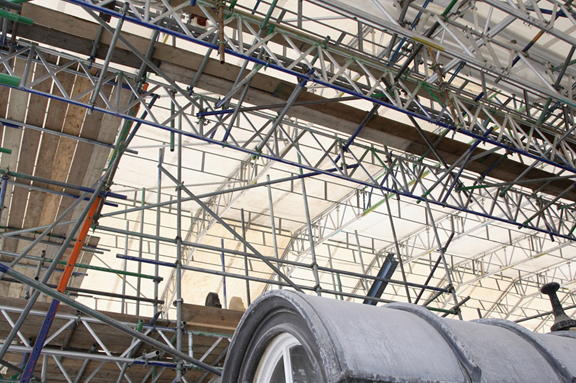