Harsco Infrastructure (SGB), leading providers of scaffolding, access and formwork services in the UK, played an important role during essential maintenance work at one of Scotland’s most beautiful and romantic landmarks. Eilean Donan Castle, a spectacular 13th Century structure situated on an island at the head of three sea lochs near Kintail on the West Coast, is one of Scotland’s most photographed monuments and has provided the backdrop to numerous television and film productions.

Harsco Infrastructure provided a combination of CUPLOK® system scaffold and traditional tube-and-fitting to main contractor Morrison Construction, enabling access during repair work of the stone bridge that connects the Castle to the main land.

Erected alongside the bridge in the tidal estuary, the 55m long, 2.6m wide and 4.0m high scaffold allowed Morrison to remove and re-build the stone parapet without obstructing the bridge, thereby maintaining full access for the public to the Castle at all times.

The combination of CUPLOK® and tube-and-fitting scaffolding enabled Harsco Infrastructure’s designers to accommodate the curve and slope of the bridge while permitting speedy erection of the structure on site. The design, which also had to take account of tidal conditions, was completed so quickly and efficiently that equipment was delivered to site within two days of the initial enquiry. 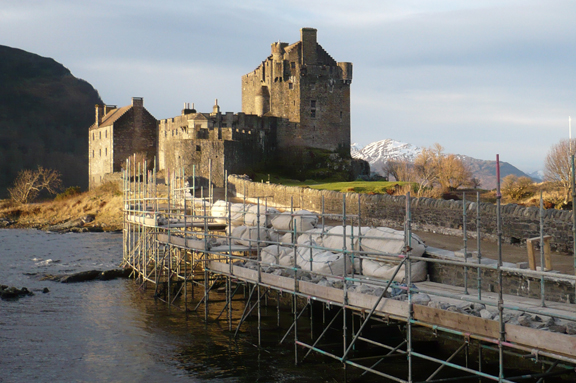